“I wish to meet an RAF pilot”

John's health is on the up after he received a kidney transplant from his mum. His second boost came when his wish to meet the Red Arrows came true - broadening his horizons so much that he's knuckling down at school to reach new heights!

John, from Carnforth in Lancashire, was born with kidney problems. Dialysis helped at first, but at one point his family almost lost him. John needed an urgent kidney transplant and, fortunately, his mum Marie was a good match. She successfully donated her kidney to him when he was three. Since then, both Marie and her husband Andrew - who are keen runners - have taken part in marathons to fundraise for kidney research charities.

John, now nine, is well and has check-ups every 12 weeks. He thought his health problems might hold him back, but - in fact - they broadened his horizons. He discovered that he CAN join the RAF if he works hard but perhaps as an engineer or part of the support crew rather than as a pilot. It's career he seems set for as he's a resourceful character who built his own digger during lockdown. 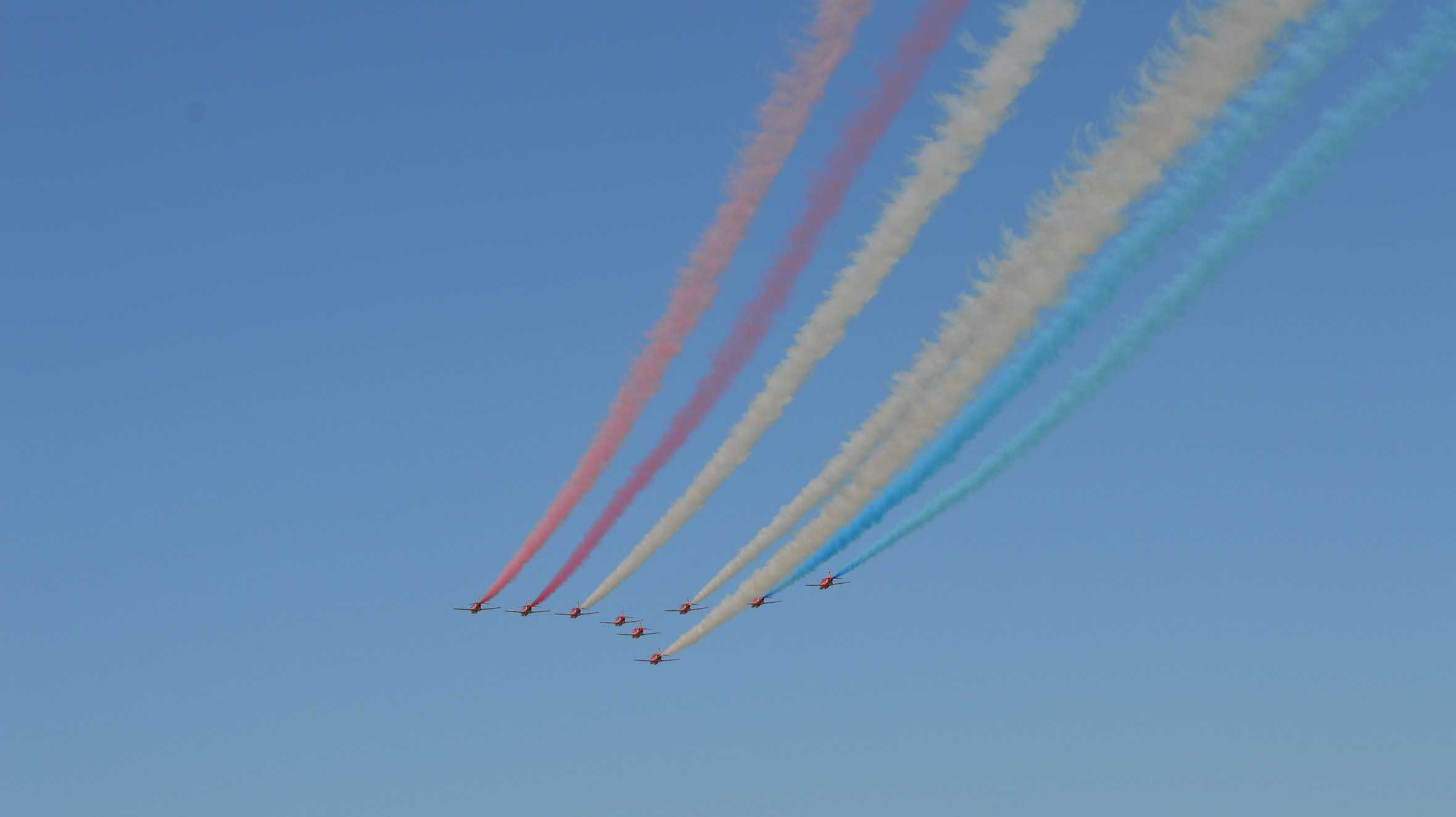 When it came to choosing his wish, John wondered if he could have his own petrol-powered go kart. But he also loves music and drumming, so he was also keen to meet the artist Stormzy. However, he decided that he’d really like an inspirational experience and wished to meet an RAF pilot so he could ask them questions and maybe even see a military jet up close.

John’s Wishgranter, Hollie made some enquiries and went one step further - arranging for him to meet a team from the Red Arrows at RAF Scampton. 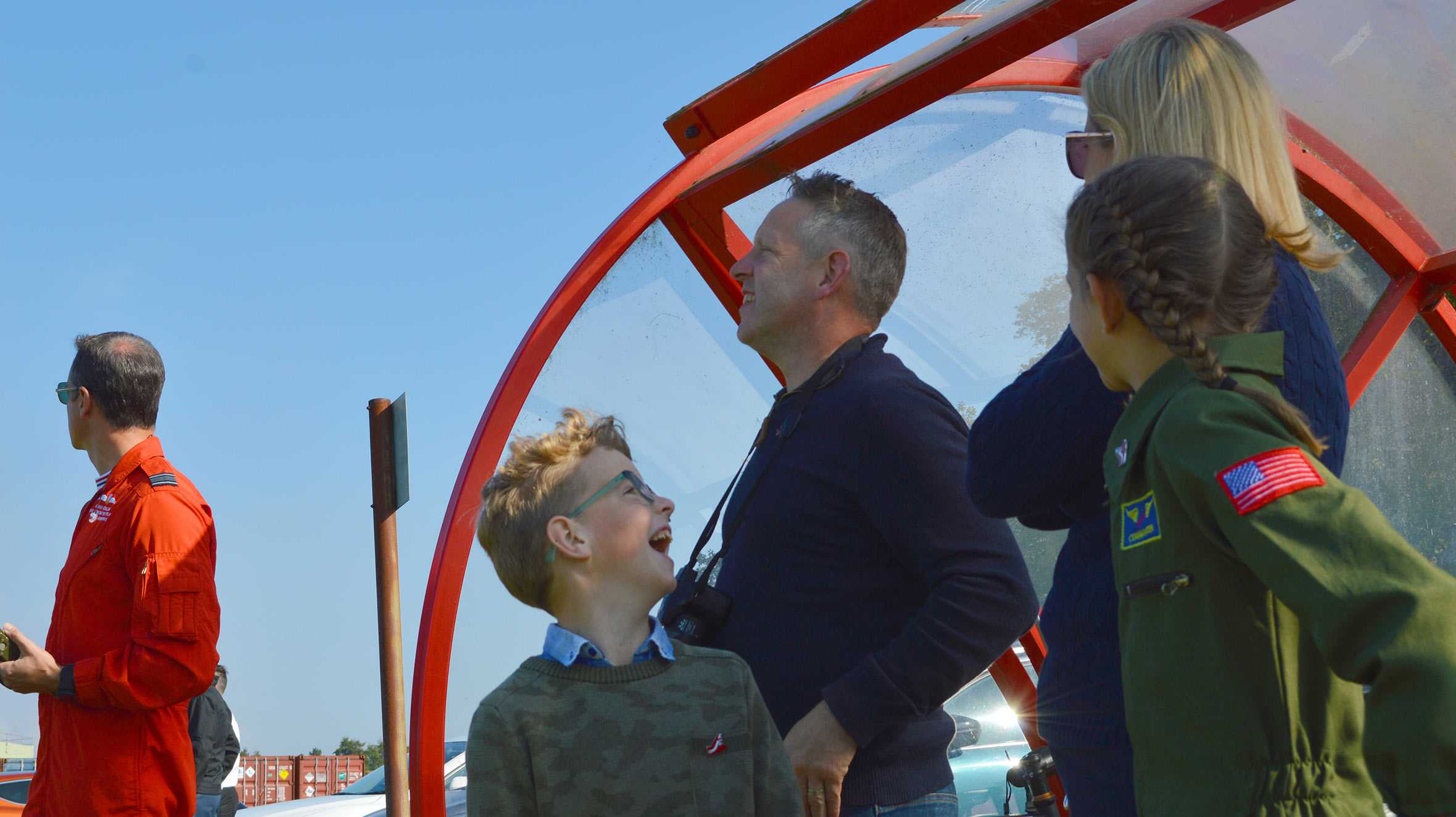 John’s family drove to the air base in Lincoln just before their home county went into local lockdown again, in September 2020, and stayed overnight.

The next morning, they were escorted to Red Arrows headquarters to watch an air display. They had a socially distanced photo taken with the Red Arrows pilots from those aircraft; had an engineering tour and then got to look through the pilots’ flying equipment. After the air display the team had a debrief and John got to quiz them about their roles flying Hawk fast-jets. 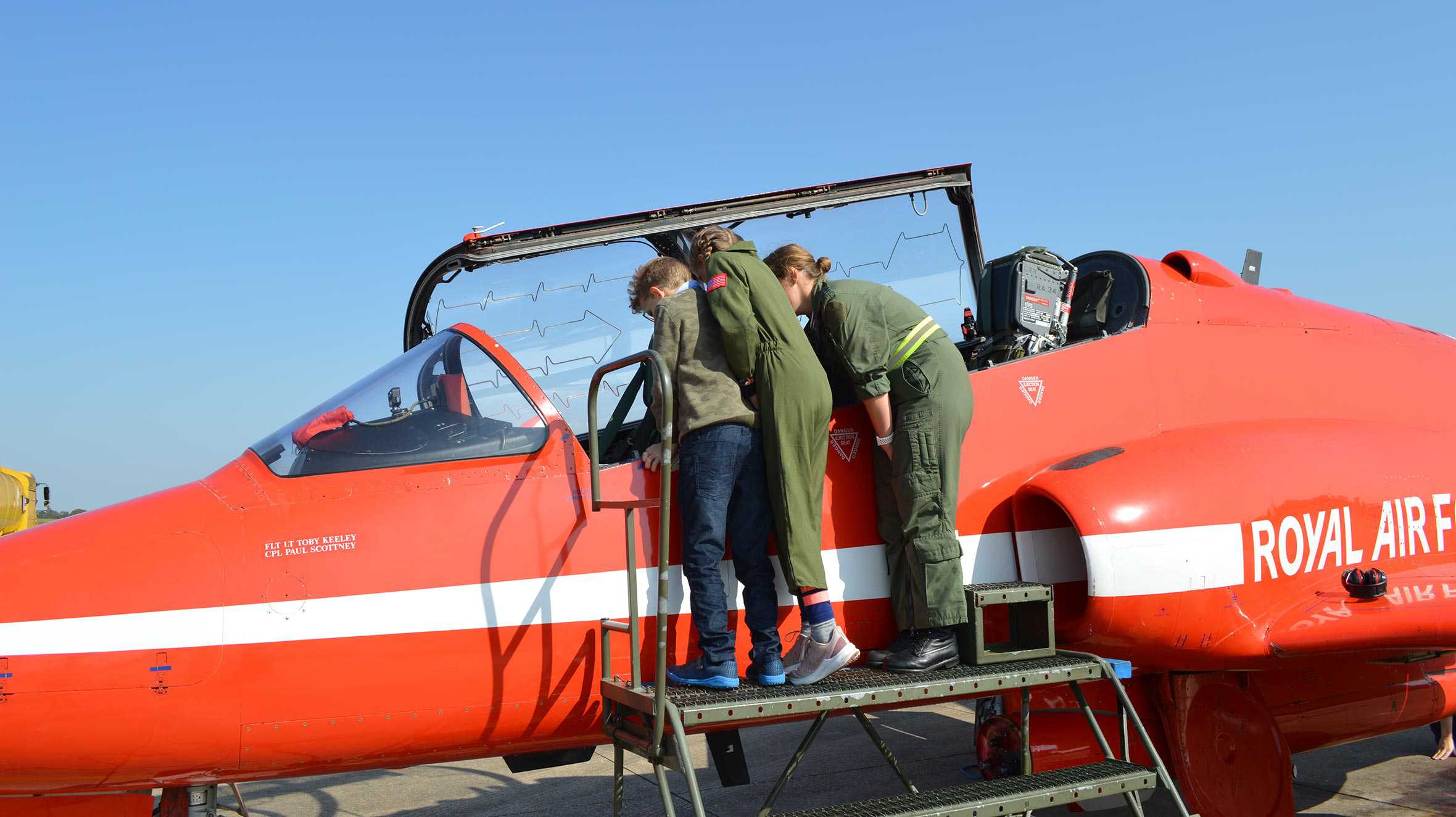 Afterwards, John's mum Marie said: “We had told John that we were going to see an air show but didn’t tell him that it was the Red Arrows so that was a surprise. He was freaked out, in a good way, when so many people said good morning John - he said, ‘how do they know my name?’

"John was more interested in how the jet was made rather than in going up in it. There was a team of engineers for each plane called The Blues and he got to talk to them.

"We were very honoured to be there and were amazed at how close the planes got to each other. The team told John how to find videos of some of the best flying stunts on the internet and sent him away with photos and RAF goodies." 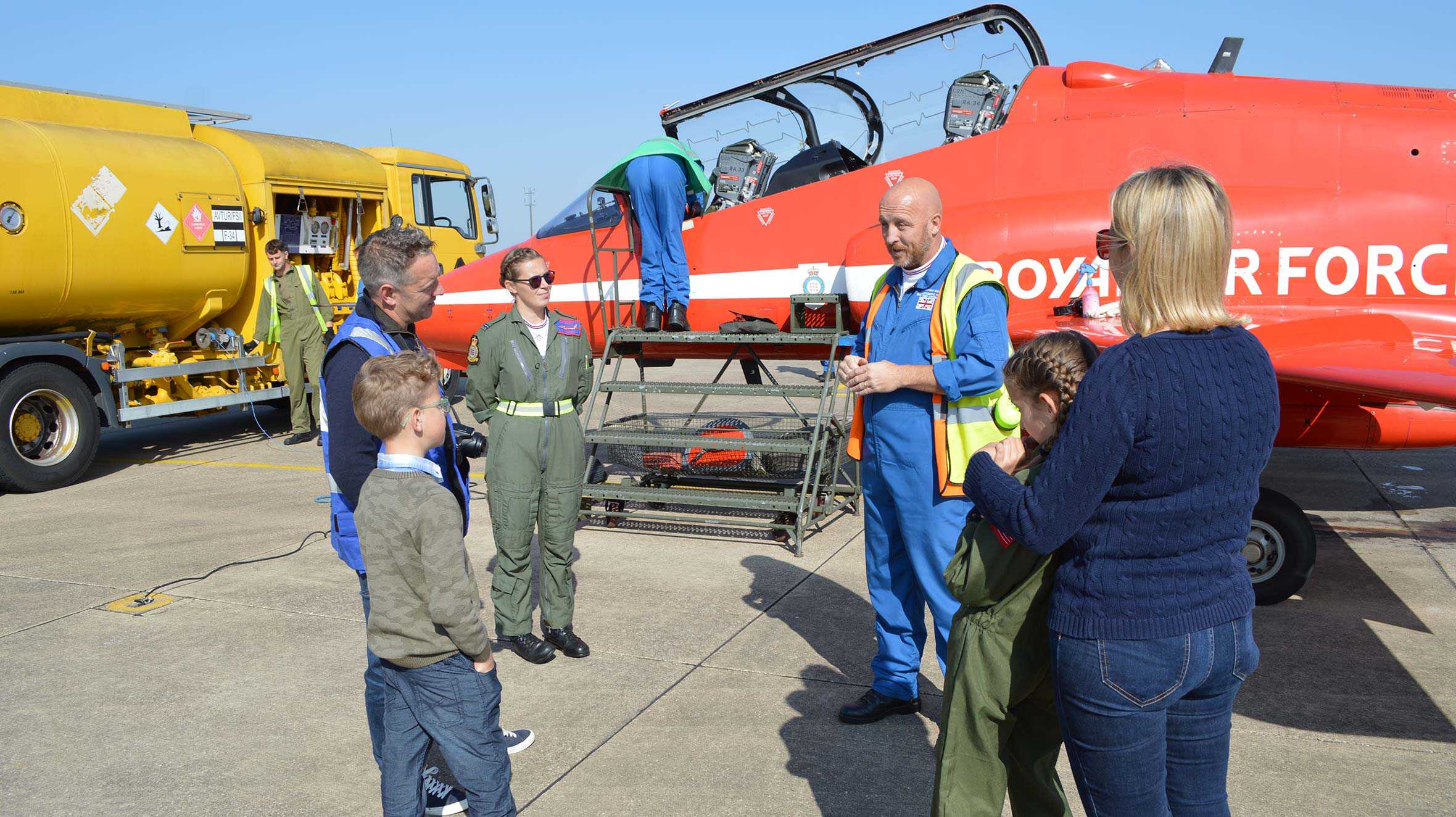 Marie continued: “Because we live in a rural area and because of his kidney transplant he’s had so many restrictions all the time - no rugby or contact sports, for instance. But this has opened his horizons right up which means a lot to him. It’s broadened his horizons about what’s out there for him career-wise and the services. He can join up despite having a kidney transplant if he goes into engineering.

“It’s also boosted his confidence because psychologically he’s been quite down at times. He’s ended up with four stickers a day at school this week because the wish has really lifted his self-esteem. If he finds something hard at school, he’ll just crumble because he’s frightened of failure, but now he’s just pushed through."

"For me, as his mum, it’s just redressed the balance to see him so happy. After losing so much time at home growing up and then going through his illness, to have really big joyous days has balanced his life like this wonderful big light."

Now John’s sister Lexi wants to be a pilot - and his dad Andrew, a former Royal Marine and fireman, enjoyed the day just as much too!

Pilot Steve Morris told us the wish also had an impact on him and his team, saying: “John’s visit was the first in quite some time for us so both the pilots and the engineers were thrilled to show John and his family round.

“It seemed like an excellent opportunity because we were in the UK so we could make it work with the days and times that John was available. We’re just really, really pleased that his family was able to come here and that the weather was nice too, which you can’t always guarantee in September.

"John was a little bit shy initially and so was Lexi but they soon opened up and we were able to bring a smile to their faces. We’re very privileged the Reds are held in such high regard but the fact that our job means we can positively impact people like John and Lexi is great.

“Lexi turned up in a flying suit so I thought she might be more of a daredevil. It was really good that Lexi had a good day out too. I could see her in a cockpit in a few years and perhaps John on the engineering side of things! There are absolutely no restrictions on what he can do later in life if that’s the kind of career he’s interested in.” 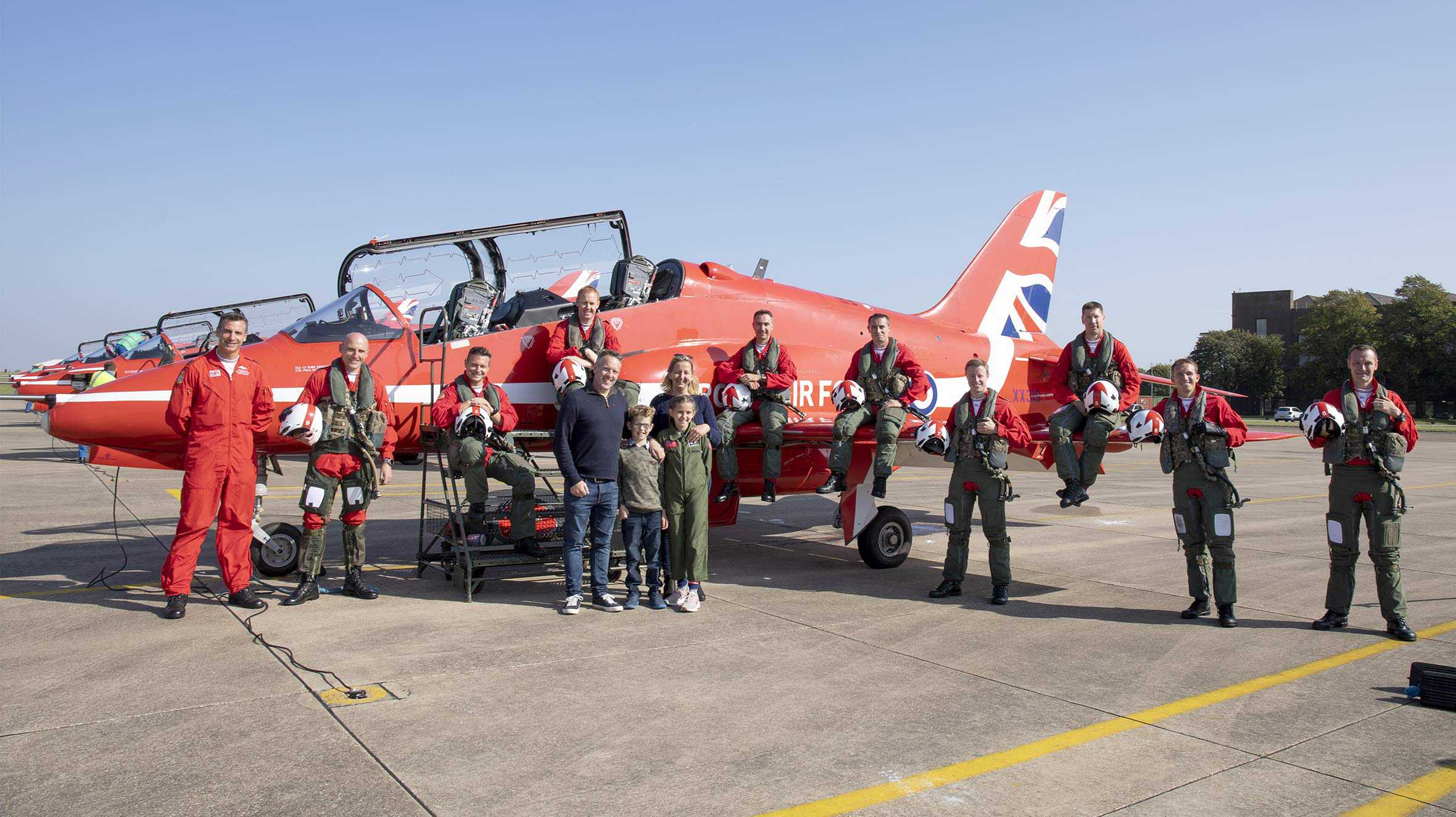 Seven year old Jacob got to indulge his love of planes on his wish to visit an aeroplane factory.

Find out more about the positive impact wishes have on wish children and their families.

You can create life-changing wishes for more children like John by donating today.