“I wish to drive construction vehicles”

Joseph loves diggers, trucks and trains! When he was diagnosed with a malignant brain tumour, his family wanted to help him heal emotionally as well as physically. His wish was to drive construction vehicles in real life - and so, he did!

Six-year-old Joseph lives with his parents and brother in mid Wales. He is thoughtful, caring and loves cars, construction vehicles, trains and painting.

In April 2016, his mum Charlie noticed that Joseph had become wobbly on his feet. Then, he started falling asleep in school. When he fell down the stairs at home, she knew it was time to see someone.

“I thought it could be an ear infection. Not in my wildest dreams did I imagine it could be a brain tumour,” recalled Charlie. Within 24 hours, Joseph had a CAT scan, a lumbar puncture and then an MRI scan which confirmed that a large cancerous mass was putting pressure on his brain.

Before the week was out, Joseph was having life-saving brain surgery. Charlie said: "We were told there’d be a 10-day recovery period, but when Joseph woke he was completely paralysed, unable to blink or swallow, and nobody knew why. It was terrifying.”

Then Joseph managed to wiggle a finger. But it turned out that he had contracted post-operative meningitis and Charlie was worried sick: "The most horrific moment was when doctors had to re-stitch the wound on his head where there had been swelling with no pain relief. It was the most atrocious, terrifying thing.”

Joseph had 30 doses of radiotherapy to the brain and spine and eight rounds of chemotherapy, living in hospital for five months before he eventually got to ‘ring the bell’ to signify the end of his treatment at Easter in 2017. 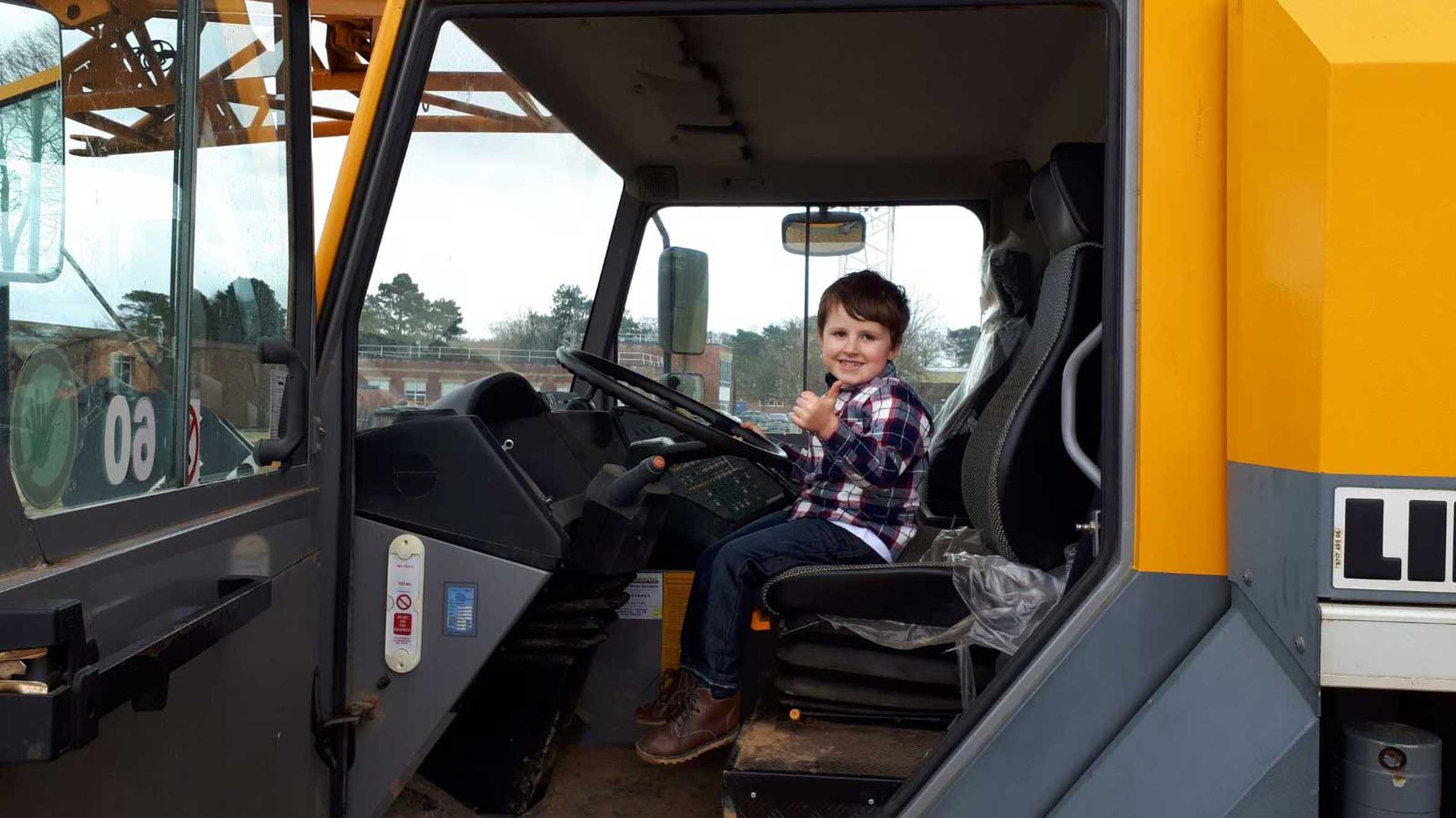 To continue his rehabilitation, doctors suggested Joseph's family should apply to us for a wish and they did.

“Now that he was physically on the mend, we wanted to heal the emotional wounds,” Charlie explained.

"At six years old, Joseph’s life experience is limited – so it was tricky for him to choose something really ‘big’. To him, going to the sweet shop is a big thing. The wish visitors were amazing and soon figured out he was really into vehicles, so he built upon that to create his wish."

Joseph wished to drive construction vehicles and Wishgranter Nicola arranged for the CITB National Training College to host a day full of adventure for him and his brother on a huge scale!

When the humongous white stretch limousine pulled up outside Joseph's home, he was shocked! He had never seen one before. He climbed in and it wasn’t long before Joseph and his brother Cian found the fizzy pop and champagne glasses. Cian had struggled during Joseph's illness too and his occasionally difficult behaviour became more intense. He was eventually diagnosed with autism.

Charlie was taught a technique to help Cian cope with what was going on around him, that involved storytelling. To help Cian prepare for Joseph’s big wish day, Charlie explained what would happen by showing him some presentation slides.

“The most incredible thing was seeing the realisation come over Joseph that his wish was the reward for everything that he’s been through. It made him cry seeing the link between this really awful thing and this really amazing thing, and that was very moving.

“As we approached the college, we could see six massive cranes. It was like a city! We met our guides for the day, Shaun from Make-A-Wish, and Bob, Ian and Stuart from the college. They had this knack of speaking to the children in a way that inspired and engaged them. 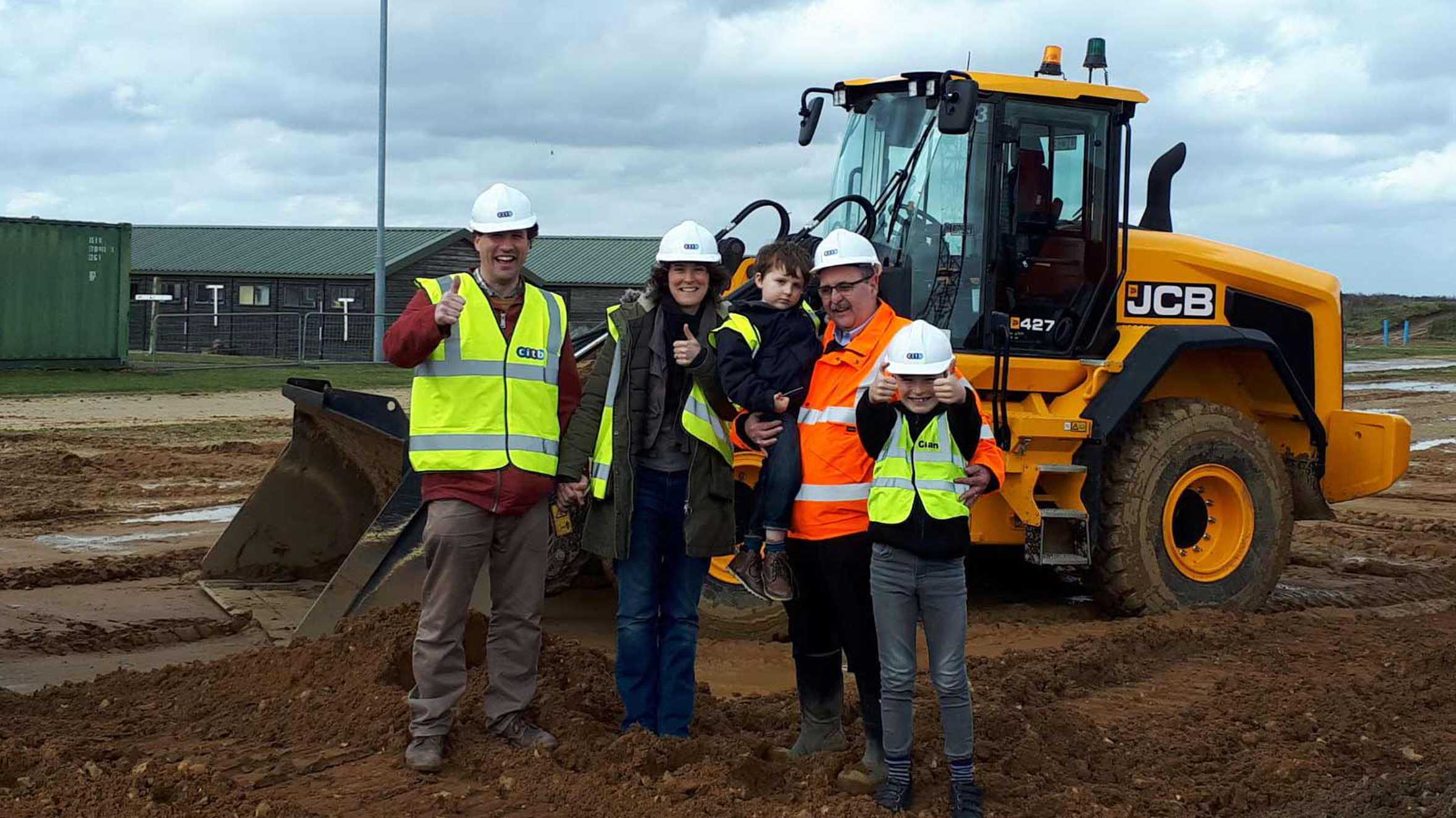 "They supported Joseph to not just watch but to work the machines himself. Joseph was driving huge dumper trucks and they created great big earthworks for him to drive over and brought him mounds of soil to move around. It blew away our expectations.”

Ian the instructor engaged Cian by telling him mind-blowing facts and figures, and in the afternoon, the family tried out the college’s sophisticated construction vehicle simulator.

Looking back on the impact of Joseph’s wish, Charlie told us: “This has helped to balance out all those bad experiences. Thanks to Make-A-Wish, Joseph has long-lasting happy memories which I know will be with him forever.”

"It’s easy to see a poorly child as frail and vulnerable, but actually they heal much faster than adults, they don’t feel sorry for themselves and they just get on with the now."

"It has been a healing experience for him to realise that after everything, he can do all these amazing things. He came away thinking ‘I can drive a digger’ and that was really empowering for him.

“Joseph clearly had had an amazing day because he had the biggest smile on his face the whole time. Even Cian kept saying ‘that was the best day of my life’. None of us will ever forget it. It’s with us for life.”

A few months after his wish Joseph had his six-monthly scan and Charlie recalled: “We had 15 months of good health for Joseph and weren’t worrying anymore about the results. However, we got a call to come to the hospital. For the next 24 hours, I burst into tears, felt sick and didn’t sleep.”

A new tumour had grown at the front of Joseph’s brain. After the trauma of his operation, Joseph’s parents were relieved to find it didn’t require surgery. Instead, further radiotherapy was needed, followed by a year of oral chemotherapy.

“Joseph would hide because he didn’t want to take the chemotherapy. He was highly traumatised and distressed when they tried to insert a tube for the treatment, so he agreed to take it orally,” Charlie told us.

"I had to sign more forms for that medication than when they operated on his brain due to the risks to Joseph and the rest of the family.”

Thankfully, Joseph completed treatment in December 2019 and went into recovery. He's gradually returning back to school.

"It was absolutely life-changing in terms of his rehabilitation. If you look at it as a seesaw, we were in the deficit with all the negative experiences Joseph endured. Make-A-Wish got that see-saw back to an even keel. It was all about readdressing that imbalance."