“I wish to have a prom for my 10th birthday”

Imagine losing control of your own body and not being able to talk about it. Jack, nine, from Sunderland has never uttered a full sentence. At 16 months old, he was diagnosed with Sanfilippo syndrome - a rare type of childhood dementia, which left him unable to talk and in a wheelchair. Tragically, there is no treatment and most patients don't reach adulthood. 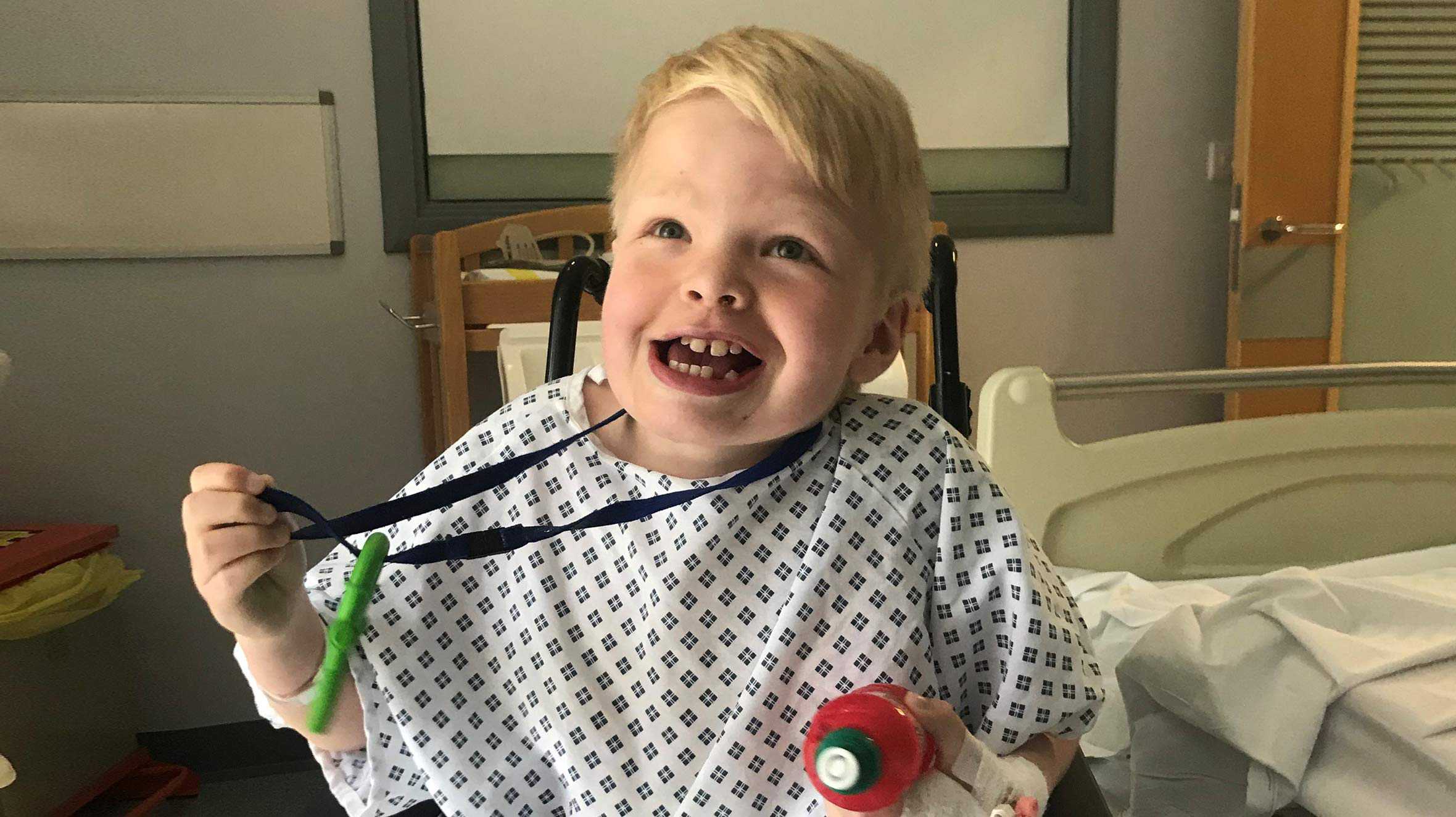 "With him being non-verbal, Jack has taught us that love needs no words."

A book with no words

Jack's family found the devastating diagnosis so early in his life inconceivable. His mum, Gemma, said the news was like an out-of-body experience: “It was like they were telling someone else. I can’t explain the feeling, even 10 years on.”

Unfortunately, Jack’s dementia means he is only regressing in health.

Gemma described it as: “Lately it’s like getting a book with no words; it’s hard to read him.”

The family find it hard to take part in activities together because Jack needs to take regular medication and can't always get involved. This leads to the often unseen struggles within families, as Jack’s parents share responsibility for looking after him while also ensuring that his sister, Lucy, can socialise and have fun. 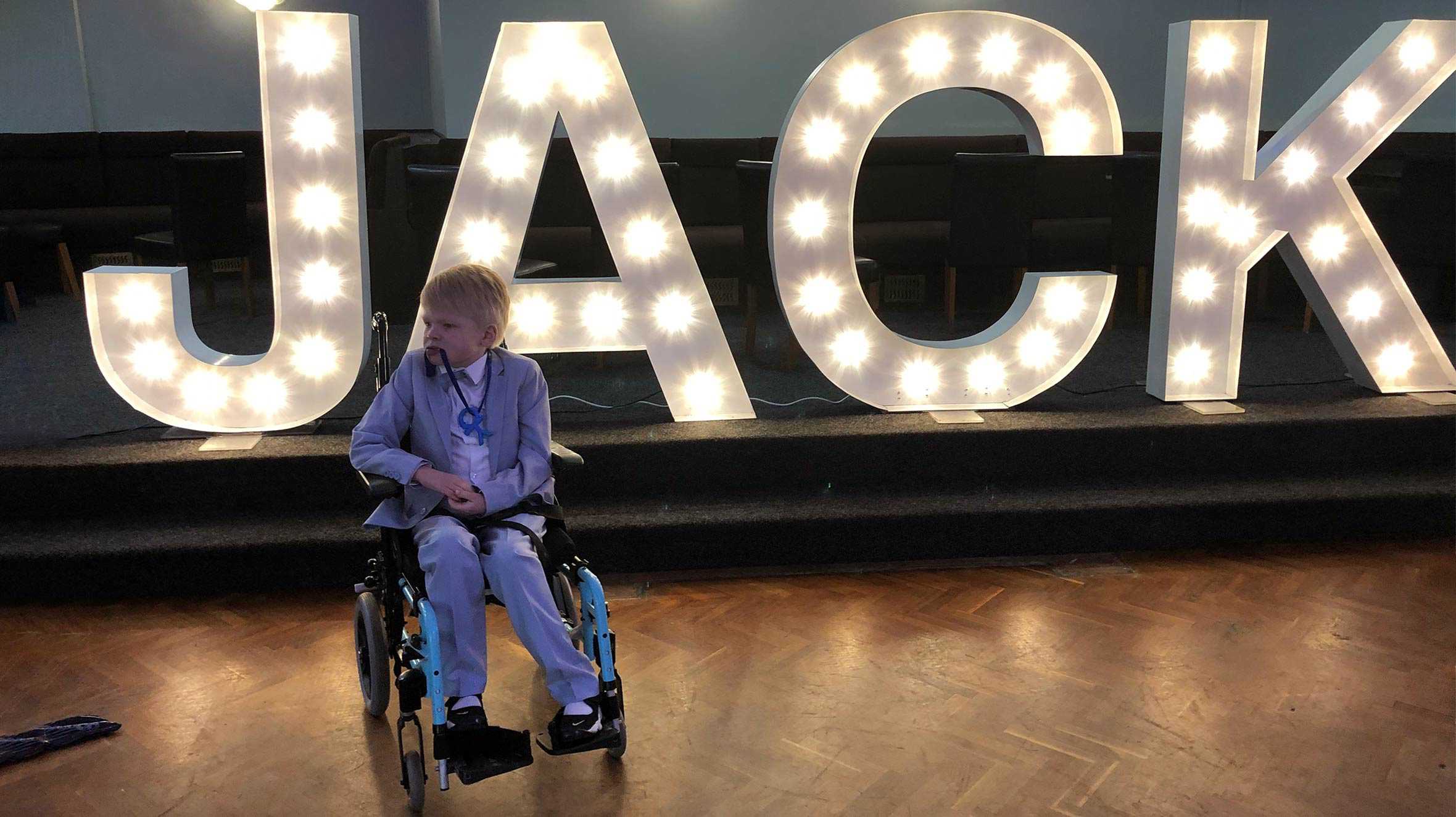 Jack with his name in lights

Filling in the blanks

Jack could not express what he wanted for his Wish. But, using a mother’s intuition, Gemma knew what he would love most! He loves school so much that the family called it ‘Jack’s Disneyland’. He also loves the singer Cheryl and listening to her has helped the family through many tough times, including tiring trips to hospital.

Jack has always preferred the company of adults to children his own age. Despite this, he’s proved that you don’t need words to impress and is known in school as ‘Jack Hefner’ because of his affinity with the ladies! This may be due to possessing the “best laugh you’ve ever heard."

With all this in mind - and a helping hand from you - Jack’s wish became a reality! 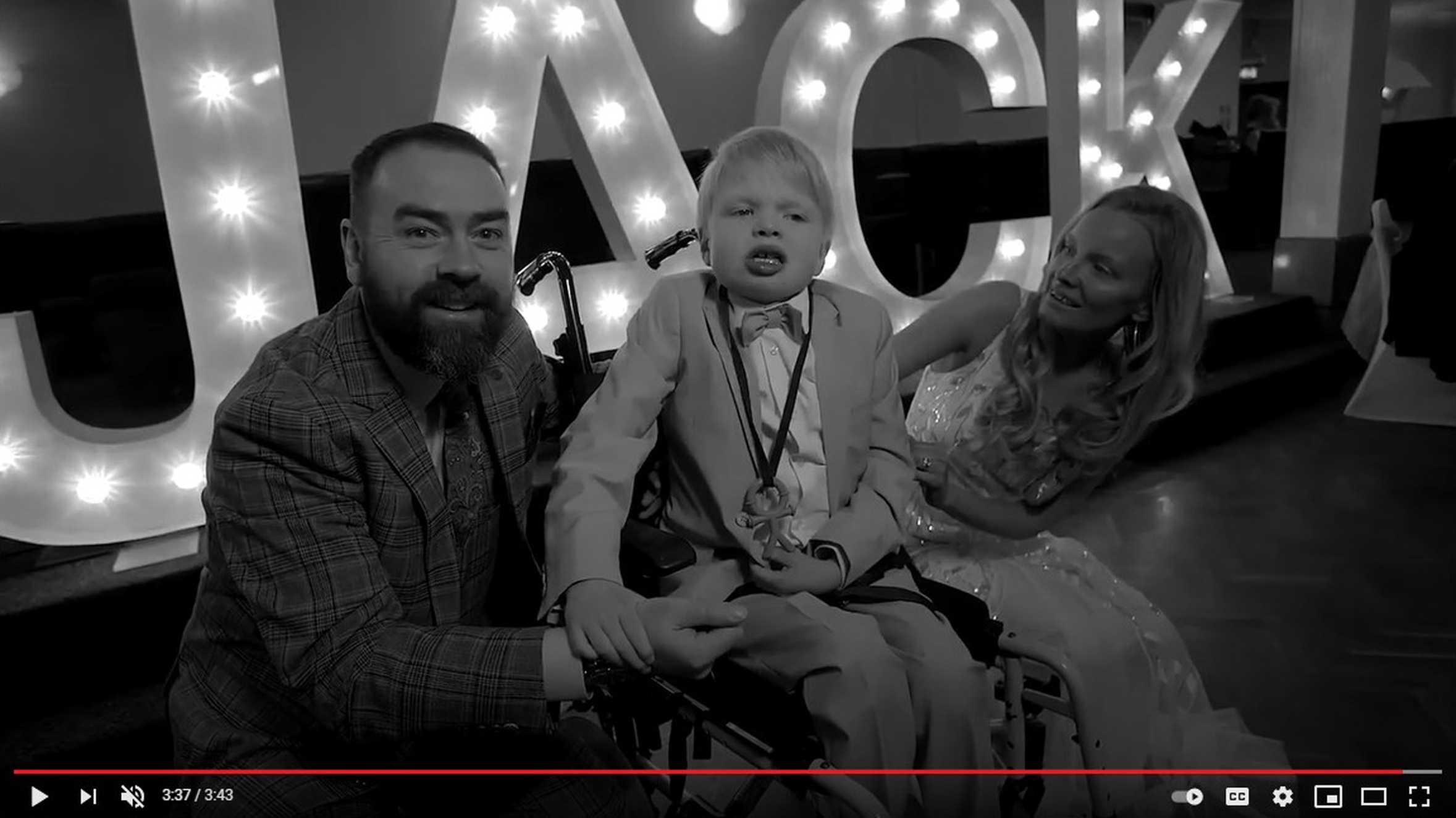 End of the chapter

Sadly, Jack has never truly celebrated the milestones in his life because his debilitating condition means he can’t play with toys, so birthdays and Christmases bring only practical gifts. But with your support, we helped Jack celebrate not just this year, but all 10!

“Every year I cry because his birthday signifies another year over.”

Jack's family turned to Make-A-Wish and asked us to help them make memories to treasure for a lifetime, no matter how short that may be, by staging a special prom-style party for him.

Gemma said: “I’ve invited people that have had an impact on Jack’s life, like his nurse, his barber and his teachers. It’s for us all to share and enjoy time with Jack.”

The wish was the personification of Jack at his happiest: cool, calm and relaxed. Despite Jack's parents being apprehensive about his reaction to a brand new experience for the family, Jack took the day in his stride. He donned the smart suit we had bought for him and rolled up in a limo, like a film star, to attend his first ever party - a celebration of his birthday, his school prom and his life. Jack spent the day playing, dancing and entertaining his friends.

Gemma said: "It was the best children’s party I’ve ever been to. It was like Christmas too with all the ladies around him. He was dishing out so many kisses, I’m surprised his lips weren’t sore!”

Jack made the most of every minute of his wish. He danced through a whole song with his mum for the first time, smiling throughout and received a personal video from his idol, Cheryl, which was a huge highlight:

“I don’t think I’ve seen him smile the way he did when Cheryl’s video came on. It was a dream come true.” 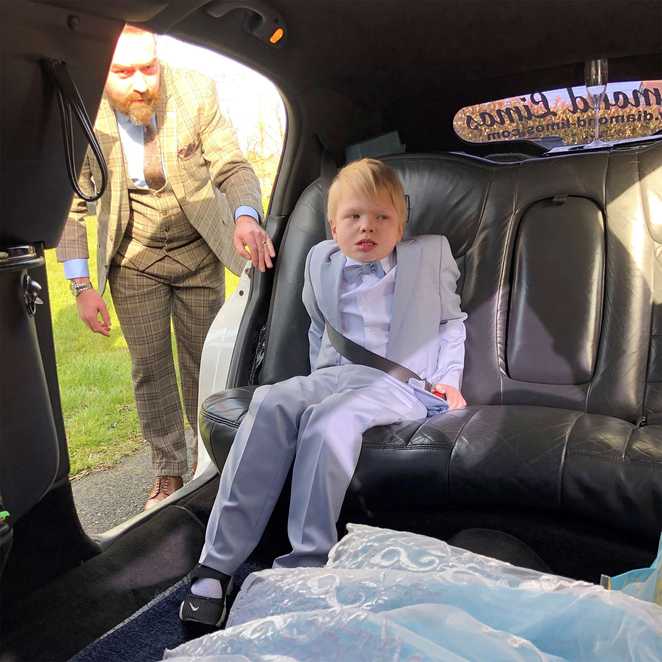 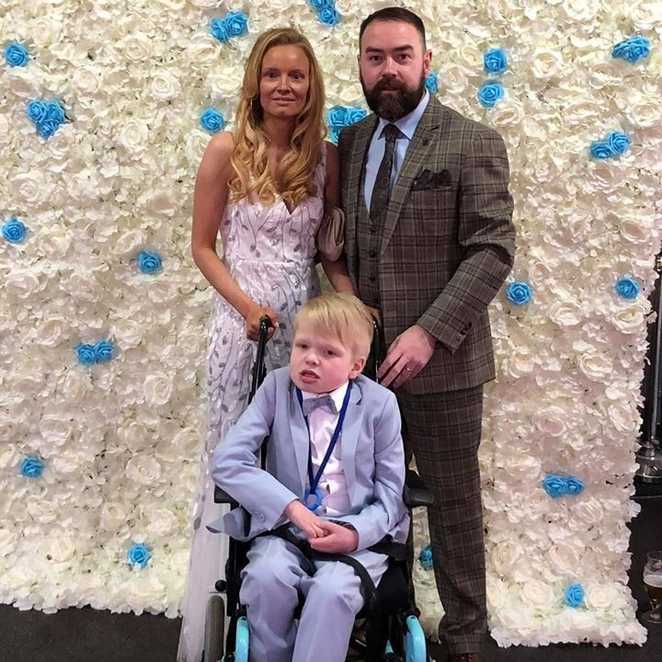 Nothing more to say

Gemma and Jack’s family have had to come to terms with one of the hardest things imaginable – the inevitable loss of their son as Jack has now been moved on to palliative care. But the memories of that special night will be something they can treasure.

Gemma advised: “It’s alright not to hope. Everyone hopes something will come along, but you have to come to terms with it. We hit a brick wall when treatment didn’t work. Now, we’ve learnt to just enjoy Jack and we say ‘Great, this is our Jack for this week.' It’s totally true that you can’t worry about tomorrow.”

During his wish, Jack and his family were able to enjoy quality time together when it really mattered. Thank you to all those who donated to make that possible.

"Jack's wish is a memory I will cherish forever. It will never die. For the whole 10 years he’s been alive and however long he has got left, the party has encompassed that." 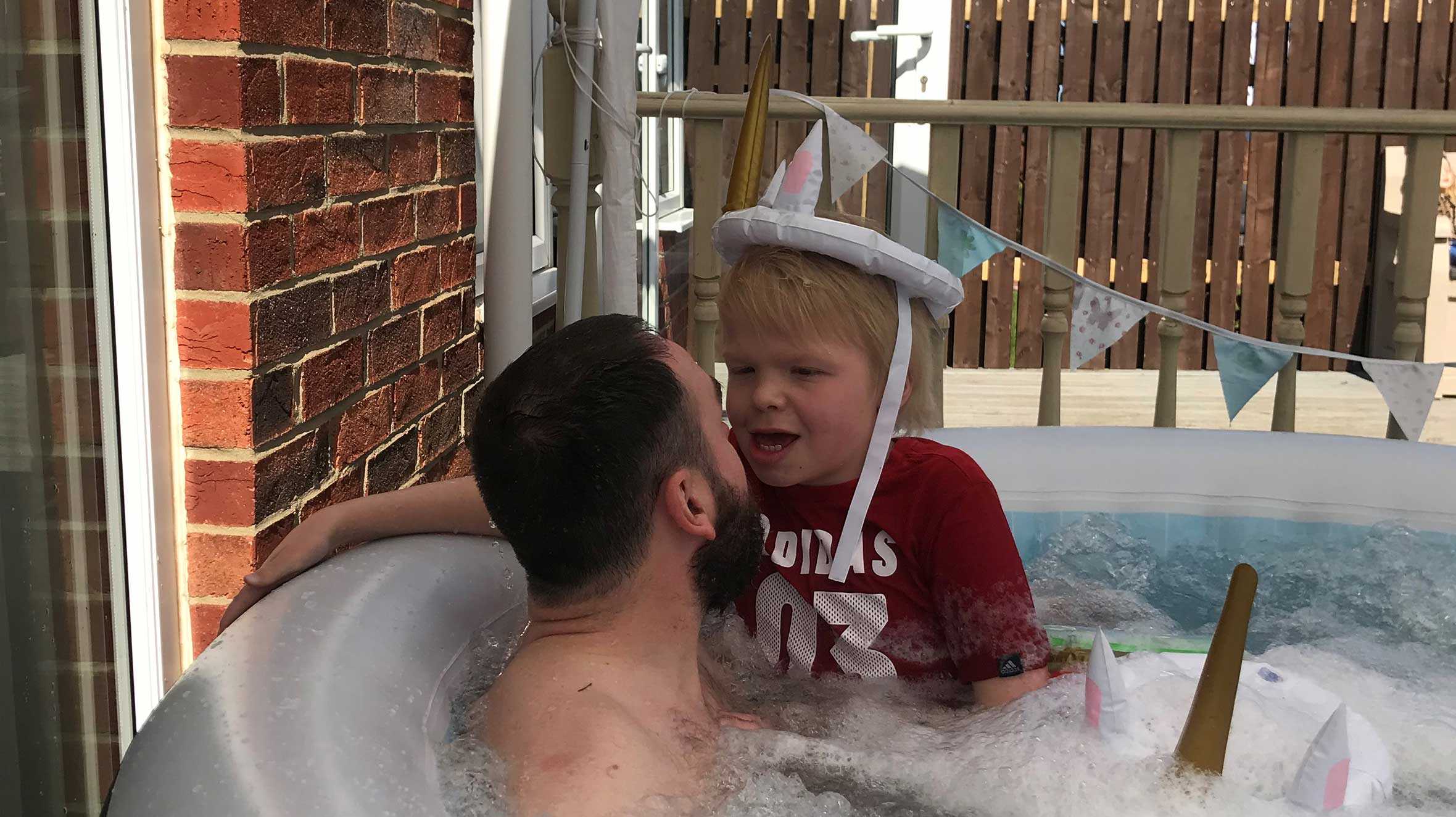 Jack playing in a hot tub with his dad

We caught up with mum Gemma on the anniversary of Jack's wish and she describes her emotions looking back on that special day:

"I cried seeing the memories of Jacks prom today. I’m just so glad it was postponed, Jack has declined a lot this year, the first lockdown he just lost the will to live because he was stuck in the house. He’s lost his ability to walk so if his prom was postponed I’d never of had the chance to dance with him. I’d just like to thank you all again because whatever happens now, I’ll never be able to top that memory, it’s so precious.

"The first lockdown we made the difficult decision to send him back to school after seeing him decline so much. I just couldn’t let him die miserable in the house, it would be time he would never get back. After he was back about 2 weeks he got his sparkle back, but unfortunately he couldn’t get his walking back."

Despite everything, Jack is still showing his true colours through it all and turns 11 this week.

Read about other children whose wish was to have a party with friends and family.

Read about other wishes we've granted for children from the Tyne and Wear area.