Paul tells us about his role to celebrate Volunteers' Week 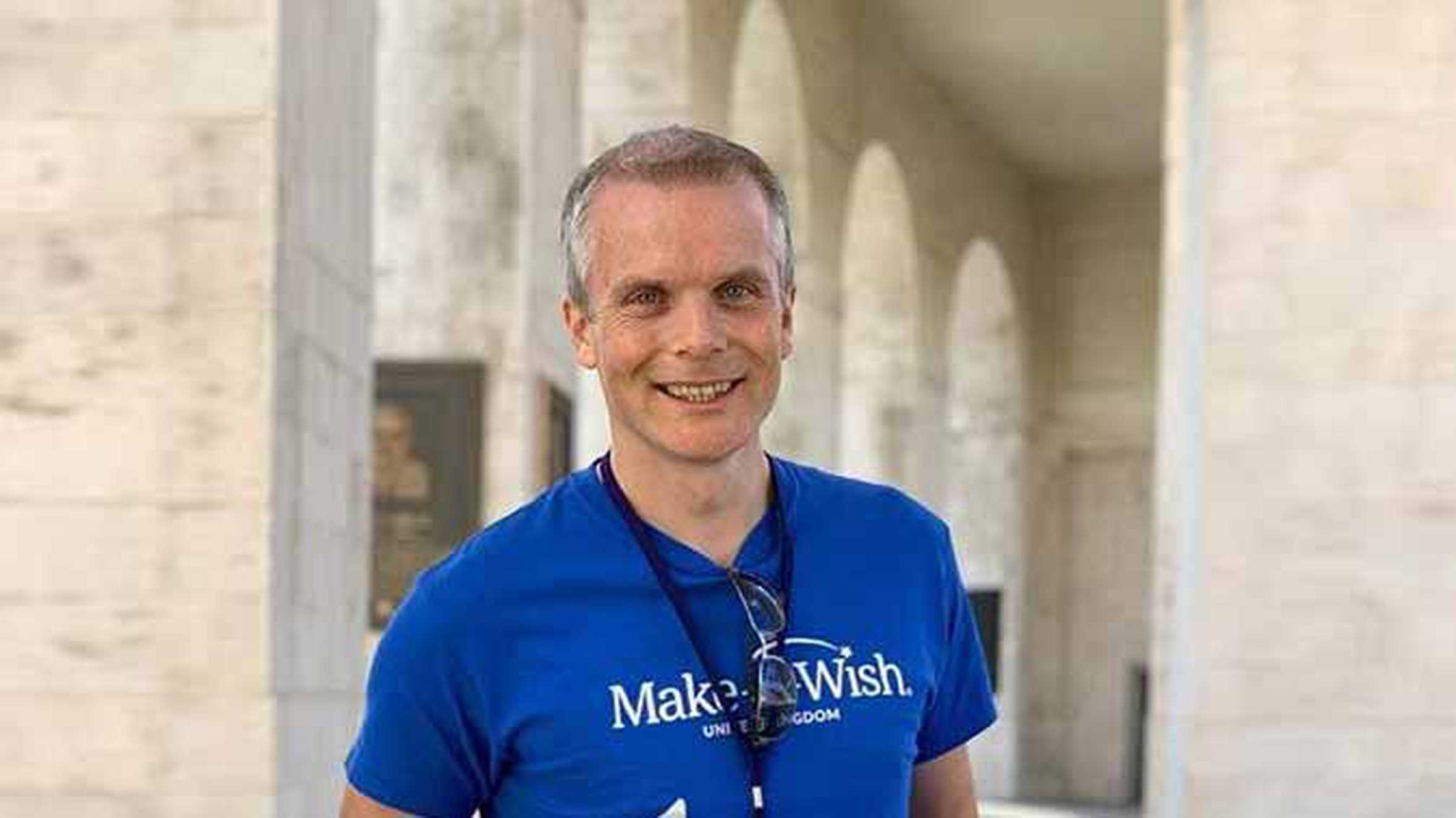 They say not all heroes wear capes. But there’s a hidden army of volunteers who make wishes happen and some of them do wear a superhero cape sometimes! One of those people is Paul Blakebrough, AKA Paul Star Hero. To mark Volunteers' Week, we thought we’d tell you more about Paul and what inspires him to volunteer his time to us.

Why do you volunteer for us?

“It’s a selfless act but it’s selfish too in that it’s really helped build my confidence, decision-making skills, coping mechanisms, put things in perspective and honed my presentation skills. Last week I presented to a room of 30-40 people - the entire office moved down to the breakout area for this presentation, so it really made me up my game. When anyone asks what I do, they’re always more interested in this role than my day job! Also, as a community of volunteers, you’ve got a common purpose, and you’re putting yourself in a scenario you might not otherwise experience. There’s also great variety at Make-A-Wish, you can do cheque collections, bucket collections, wish visits, be a helping hand on wishes to ensure they go smoothly, cheer at events like marathons or wear a blue Make-A-Wish t-shirt and raise awareness by talking about the charity.

"As a community of volunteers, you've got a common purpose."

For me it’s very simple, we make children’s One True Wish a reality and I basically talk to people about that. For instance, it’s amazing to sit in front of a family and discuss their child’s wish. One family wished for a hot tub wish because their child had no movement and they never got to go in the garden together, but with a hot tub for her they could. The water was very relaxing for her, but the actual “why” of the wish was so that they could spend family time together outside. I love it and I love talking about it!

Quite often I’m in costume, bucket collecting or raising funds - people instantly think of children and they often say: “What you’re doing is fantastic, here’s some money!” Or I tell people, Make-A-Wish is local, it’s in your area, there are people visiting your shop that may be eligible for a wish, but we can’t reach every child without fundraising.

I also get to hear about the charity’s partnerships with organisations – for example, I’ve bought tickets for the opening night of BIG The Musical which kicks off in the West End in September. I’m a huge fan of the film!

How did you first hear about Make-A-Wish and what inspired you to get involved?

“I was looking for purpose – some way to give back – and nothing really resonated with me until a colleague told me that Make-A-Wish had a fantastic volunteer role, so I looked into it and it just sounded like something I’d love to do. Someone at work, where I’m a Business Development Manager, was a Wish Visitor and they said my skills would be really good as a Wish Visitor too because the role involves drawing information out of a family and meeting new people which is what I enjoy.

The thought that I could help make children’s wishes come true, well, it’s not an opportunity that you get in everyday life so for me it instantly clicked in my brain. I applied online and the next stage was a telephone interview with the Regional Fundraising Manager. I was really nervous for that. Then the group of us that had been successful went for training and I’m still in touch with some of the people who were on that course. It was a real turning point because I’d had some challenges with stability at home and I was searching for a purpose and Make-A-Wish definitely delivered that for me and I’ve just kind of grown with the charity and gone from one area to another.

"I was searching for a purpose and Make-A-Wish definitely delivered that for me."

When did you start dressing up as costumed heroes and why?

“I’ve been costuming for about five years and I met other costumers when I did a bucket collection at a comic shop. When I saw children’s faces and their positive reactions when they met me, it continued from there. Also, Dan in the Wishgranting team sometimes needs superheroes for wishes he is arranging so I opened a couple of doors to different people who were available to do it. One of the most memorable was the Green Lantern wish. Dan created the story and we put it together on the day. I’ve been Green Lantern, Spiderman and Deadpool so far, you never know what’s next! The great thing about wishes are that they’re from a child’s imagination so they might come up with something that you’ve never heard of. Every wish visit is unique, every child’s imagination is unique and everything they wish for is personal. It’s a rare thing in today’s world. As you get older, you lose a lot of the ability to be imaginative and experience that wonder and hope. It makes me feel like a kid again to witness it or to be involved. 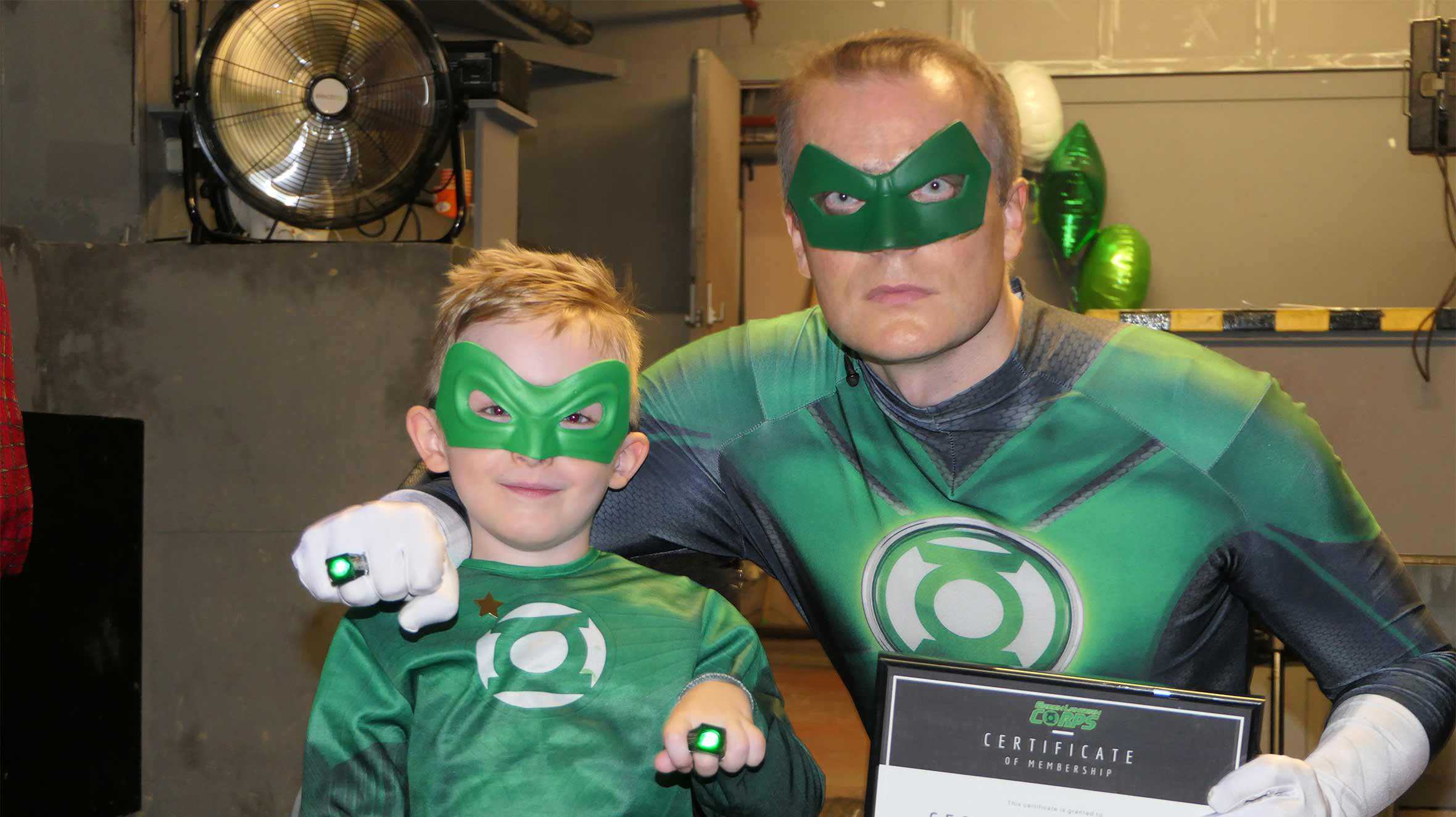 What else does the role involve?

“I do public speaking at universities and businesses. My day job is field based so I’m lucky they support me to manipulate my schedule to do the talks which might raise £5,000 so it’s very rewarding. I’ve been down to the historic dockyard in Chatham dressed as Spiderman and collected at supermarkets. I was asked to attend the premiere weekend of the film Avengers End Game at the Odeon in Leicester Square as Thanos, the eight-foot character from the movie. I always ask that any appearance fee that’s offered to me is donated to Make-A-Wish, a friend who saw me there kindly donated a lovely amount and this was matched by her employer (a multinational oil company) that weekend which was fantastic.

Are there any wishes that have really stuck in your mind?

It can be something very simple like the boy who wished to wake up and have toast with Spiderman. Or the child on 24-hour dialysis who was completely selfless and wished to take his mum on a holiday so she could get some sun, didn’t have to make him dinner or drinks and didn’t have anything else to worry about. He knew how tired she was and how hard she worked. This was a 12-year-old boy’s wish! When I was that age, I was a selfish old so-and-so, and he didn’t go to school, he had a very limited social circle because of appointments and he just turned around and said that. My mind was completely blown by what he said.

That’s what I mean when I say it’s completely random what scenario you walk into. It could be that they want a princess makeover but they don’t want it because they want to be a princess, they want to feel confident like those princesses – it’s an inner confidence to be like somebody else for a day.

There was also a girl who wished to go and see The Chase being filmed. She watched the programme during her recovery so she felt that the TV show got her through that period of her life. The wish was designed so she could see it being filmed at the end of her treatment, so the wish became her end goal and Bradley Walsh was amazing on the day.

The Green Lantern wish still gives me goosebumps because George was in a wheelchair due to his condition Spinal Muscular Atrophy’s wish and in the comics, green lanterns can harness the power of will. If you will something to happen it doesn’t matter about your physical state, so that’s how the wish came into his head. After the wish, George’s mum sent me a picture of him going to sleep with the sword and the ring I gave him. The day left me with such a strong sense of satisfaction but also the desire to strive on helping to grant as many wishes as possible.

Last week was a difficult week for me at work but I had the Tuesday off, so I went to Medway Hospital to deliver comic books, toys and posters that I’ve been given and helped on a WWE wish at the 02. I got to meet these two amazing young girls who were so excited about going backstage to meet their absolute idols. In those moments you think nothing else matters. This is incredible. We got some really good feedback from that wish.

I was on another brilliant wish the other day that Dan put together for a boy who wanted to be Harry Potter. It was so cool. What’s more, wishes bond the family over a common purpose and gives them hope and direction. It unites them because wishes often involve siblings who can sometimes feel slightly neglected. Thinking of becoming a volunteer?

Why not take a look at our current volunteering opportunities, to see how you can helps us grant more life-changing wishes for children with critical illnesses.